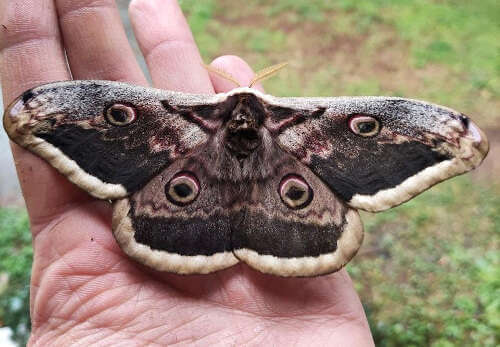 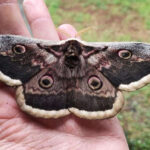 Saturnia pyri, also known as the giant peacock moth or the great peacock moth, with a wingspan of 87-166 mm, is the largest silk moth you can find throughout Europe.

Biology and distribution of Saturnia pyri, the giant peacock moth

Saturnia pyri is a Southern European species. Its range includes the warmer regions of Europe: from Portugal and North Africa, southern France, through Alps (Austria and Switzerland) to Balkans, Italy and Ukraine. It is found across the Caucasus Mountains, Georgia, Azerbajdan to Turkey, north Iraq, Syria, Mountains of the north Iran, Lebanon, Israel and the Alborz and Zagros Mountains of Iran. Populations are present also in the Mediterranean islands of Corsica and Sardinia.

Saturnia pyri habitat consists in dry, hot and open landscapes with small trees and shrubs of the rose family (Rosaceae) like Prunus, Pyrus and Crataegus. A preference is shown for the Persian walnut (Juglans regia). Caterpillars can use the toxic compound juglone that is present in the leaves of Juglandaceae.

The giant peacock moth eggs are whiteish-grey, they are laid on the underside of the leaves (or everywhere in the netting cage) in rows of up to ten. They hatch in about 11-20 days depending on the temperature.

L1 caterpillars usually take a while before starting to feed. They wander around looking for a good place to settle down under a leaf with the characteristic “U” position. While growing, the larva tends to move along the plant to avoid a quick defoliation, easy to be spotted by predators. That’s why they consume a large quantity of leaves and young-tender twigs.

Pre-pupae caterpillars of the giant peacock moth become orange with brighter spots; cocoon spinning is done between twigs, in the bark or between ground and the base of the tree. Saturnia pyri can also spin its cocoon between rocks, dead wood and in the crown of the trees

The cocoons are brownish and up to 5 cm. In some cases, the pupae can overwinter for more than one year.

It’s important to know that Saturnia pyri needs a dry and warm environment.

The eggs can be stored in the classic Petri-dishes (Petri-dishes in our shop!). Spray the lid of the Petri dish gently, a couple of times during incubation.

Once hatched, Saturnia pyri larvae are very sensitive to humidity and overcrowding. The outdoor rearing method has proved to be best; once the young caterpillars begin to feed, they can be moved outside in the sleeving net. Good meshes are very fine, impairing the transit of the smallest animals.

As an alternative, the netting cage is a good environment to rear caterpillars indoors. Change the branches often and offer very fresh leaves.

What is the best host plant for Saturnia pyri?

The scientific epithet “pyri” may indicates that Saturnia pyri feeds mainly on the pear tree (Pyrus). Interestingly, this is not completely true. This species used to be a pest of some cultivated fruit trees like pear and almond (Rosaceae ), but in wild they’re recorded to feed especially on Persian walnut (Juglans regia).

In captivity, they do well on ashes (Fraxinus), plums and cherries (Prunus), hawthorn (Crataegus) and sweetgum (Liquidambar).

The last instars of the great peacock moth show an interesting defensive display. Once disturbed, the larvae generates a sequence of sonic and ultrasonic noises with peaks of 3,7 kHz to 55,1 kHz. Such peaks can be followed by secretions of a defensive chemical including deterrent phenolic compounds. The combination of these strategies is a good defense mechanism against a wide variety of predators as birds, insects and arachnids. Pay attentions when touching them!

Giant peacock moth cocoons are now available for sale in our shop. You can combine them with a range of other butterfly and moth pupae. Adults will emerge in spring 2022. Feel free to contact us at [email protected] for any additional information.