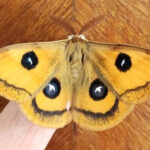 Aglia is a genus in the Saturniidae family, it counts 6 species: the greatest Eurasian species Aglia tau, 4 Chinese species (A. homora, A. vanschaycki , A. sinjaevi, A.ingens) and Aglia japonica, from Japan.

Morphology and distribution of Aglia tau

With a wingspan of 60-84mm, the Tau Emperor moth is possibly the smallest European Saturniidae. Both sexes are yellowish orange with dark brown scales on the underside of the wings. Aglia tau is known for its 4 black spots with a Tau on the center. Tau (τ, Τ) is the 19th letter of the Greek Alphabet. Adults of this species show a wide variety of colors, with the darker form (f. melania) typical of mountainous and cold areas or with back hindwings (f. cerberus).

The Tau Emperor is an Eurasian species, from Spain, to east across central eastern Europe to Russia, northern Kazakhstan, northern China till the Russian islands of Sakhalin Oblast. While is missing in Italy (except in the Alps and Northern Appennines) and the British isles. There are 3 isolated populations in Crimea, Caucasus and in the northern Iran mountains.

Aglia tau is a species of beech forest, lowland forest with Tilia species and Salix species and also high altitude forest with Sorbus acuparia and Birch. In the southern range, these conditions are typically found in the high mountains regions.

Biology of the Tau Emperor moth

Aglia tau is not a strictly nocturnal species!

Like their relatives Saturnia pavoniella and Saturnia pavonia, males of Aglia tau are diurnal, they search the females during the early morning. The females of the Tau Emperor stay in the base of the tree where they have emerged, calling for the males.

Once paired (copula usually requires few hours), the female will fly away the following night looking for a good spot to lay the eggs. The eggs are laid in rows of ten on the branches of the host plant. Larvae hatch in 10-12 days depending on the temperature. The first instars are unique, they have 5 spiny horns: 2 in the first segment, 2 in third segment and last one on the segment 7, such horns will disappear with larval development.

The larvae show a gregarious behavior at the first instars. From L4 they become solitary and sedentary. Aglia tau caterpillars pupate among the litter at the base of the tree. The pupa is reddish-brown and rough with no cocoon but a few strands of silk. The Tau emperor overwinters as pupa and is univoltine.

Aglia tau eggs usually hatch in 10-12 days, and the larvae can be reared both in plastic boxes and in rearing cage, or also directly in the tree using a netting. The Tau Emperor moth pass through 4/5 instars before pupating underground.

Rearing this moth is very simple, but it’s important to keep them at mild temperatures. Living in cold forests of central Europe, this species is very susceptible to the high temperatures. Achieving a mating is usually not difficult. For these reasons, we recommend it to the beginners entering the magnificent world of Lepidoptera rearing and breeding.

The Tau Emperor caterpillar is polyphagous, a preference is shown for Beech (Fagus), Lime trees, linden or basswood (Tilia) and Birches (Betula). But they can also eat Willows (Salix), Alders (Alnus), Hornbeams (Carpinus) and Oaks ( Quercus).

Aglia tau is one of the first moth species we can find in early spring in Europe, the males can be found in spring flying through the forest during the morning, searching for the females.

The Tau Emperor, despite being an European species, was a pest for Quercus rubra (Northern Red oak), an American species introduced in Europe as ornamental tree, and then, naturalized in the some central Europe areas.

Aglia tau pupae are now available for sale in our shop. They are offered together with other species of European butterfly and moths, all sold as diapause pupae to emerge in spring 2022. If you have any question or doubt leave us a comment below or send us an email to [email protected]