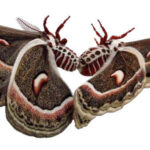 With a 16 cm wingspan, Hyalophora cecropia, the Cecropia silkmoth, it’s the biggest native Lepidoptera in North America. In addition to its large size, the cecropia moth displays peculiar and beautiful colors, both at the larval and adult stages, making it a very requested species by amateur Lepidoptera breeders.

Hyalophora cecropia is widely distributed in North America: you might see it flying during early summers nights from Canada to Texas.
After being laid in small groups (from 2 to 6), large eggs with reddish brown mottling can be spotted on both sides of many plants species, as Acer, Prunus, Betula and others. They will hatch in about 10/14 days from egg laying.

First instar caterpillars are small, black and tend to eat in small groups; the opposite can be said about the latest instar caterpillars, them being extremely colorful (from green to yellow with yellow, red and light blue protuberance), lone and quite big (can reach up to 10/11 cm in lenght).
Once they reach maturity, caterpillars will stop eating and start looking for a spot where to spun their cocoons (usually on the host plants branches).
Winter is coming soon, thus we need to wait to wait until late spring to see the beautiful, red, black, and white large wings of Hyalophora cecropia!

Rearing the Cecropia’s moth in captivity is fairly easy if you follow simple rules.
We suggest you to start rearing this American Lepidoptera species in a small plastic container where you’ll have to provide fresh food for the newly hatched caterpillars. Animals should never be kept crowded or will easily become susceptible to illnesses.
Make sure to clean the enclosure meticulously throughout the whole rearing, the Cecropia moth caterpillars will start to die if frass from their siblings is not removed often from the rearing environment.

Don’t forget about temperature! We suggest a range of 18°C-25°C, Canadian cecropia stocks will prefer lower temperatures. Humidity should never go below 40%.
When caterpillars start to grow in size (about 2 cm long) you should consider moving them to a bigger enclosure. Hyalophora cecropia performs great when reared outdoors on the living host plan. In order to rear the caterpillars directly outdoors, you will need mesh sleeves to avoid dispersion and predation.

Either you choose to go for and indoor or outdoor rearing be sure to provide pest free hostplant, how can you ensure it?
Harvest leaves from controlled places, don’t change food source if is not needed. Always try first the hostplant on one or few animals, then use it for the whole batch.
So far so good, right? Your Hyalophora cecropia caterpillars got bigger, stronger and colorful! The will eventually stop to eat and start looking for the right place to pupate.
Wait for the whole winter to pass by until, by spring, you’ll finally get your Hyalophora cecropia adults spreading their wings!

If you need more general informations on how to grow and care butterflies and moths, please visit our section Lepidoptera breeding.

Whether you have succesfully bred, found or simply observed the Cecropia’s cocoons you might have noticed a substantial size difference between them.
Some of them are fluffy and large, some other are pretty small and compact.
Why is that? What’s the story behind these unusual differences?
Patrick A. Guerra and Steven M. Reppert made an effort trying to answer this questions in a scientific article published in 2017.

This research went on over the course of 3 years; during this period of time, the two scientists, collected hundreds of wild cocoons and bred many other Hyalophora cecropia specimens in order to solve the riddle.
After observing the spinning of several cocoons in a genuine and artificial environment, setting different temperatures, visualizing the pupae and their surroundings with 3D scans they still couldn’t find a precise answer.
Structural analysis revealed that the baggy cocoons could raise their temperature faster than the compacts ones as well as absorb much more water. why the caterpillars choose to go for one or another in still a mistery.