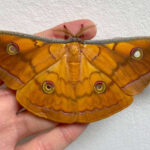 Antheraea frithi Moore, aka the wild tasar silk moth, is one of the most imported silk moth from Asia (especially from Thailand even if they’re from north-east India). Discover more about this amazing Saturniidae which can be easily reared and observed at home.

Antheraea frithi is widely distributed in sub-Himalayan regions of India, where it’s bred to produce the temperate tasar silk, with other silk moth species like Antheraea proylei Jolly, A. proylei Moore and A. pernyi Guernin-Meneville (from China). Eggs of Antherea frithi are cream yellow with a brownish band, they’re laid in number of 148-176 and they hatch in about 1-2 weeks depending on temperatures (1 week at 28°C).

First instars caterpillars are brown, then they become yellowish before the first molt. Growing, they develop white and then black setae in tubercles. They pass through 5 instars before pupation.

Pupa is red metallic and measure about 3-4 cm, the weight is 3-8g depending on sex and health of the caterpillar. The cocoons are spun between leaves and branches. Pupae is the overwintering stage: Antheraea frithi in its natural habitat is bivoltine, the pupae enters in diapause in November and remains dormant until March-April.

Antheraea frithi is a species with a huge chromatic variability. Ground colors are usually yellowish to brownish, in some case they can be very dark. Both forewings and hindwings are decorated with purple-yellow-red bands and an eye spot.

Rearing this beautiful Saturniidae is quite similar to the rearing of other tussar moths like Antheraea pernyi and other Antheraea species. Eggs can be stored in the classic plastic Petri dishes. During the first hours of its larval life, the caterpillars eats the eggshell, which consists in the first ingestion of proteins and other nutrients, you might use an atomizer to spray a fine mist on top of them. The following day, when the larvae have drunk some water and eaten most of their eggshells, they can be moved in the rearing box/cage.

The best method to raise Antheraea frithi is keeping them outside in pruned\potted trees or small shrub wrapped in netting.

Before placing in the nets, all the harmful insects (including ants) have to be removed from the host plant. Then, the net can be placed in partial shade. Young larvae should be placed in the sack once they begin to eat the leaves. Periodically, remove the excrements and spray them from the outside (spraying caterpillars is a controversial topic).

Don’t worry if you don’t hold enough space outside, Antheraea frithi can be reared also indoor. It’s important to pay attention to ventilation and humidity. Antheraea frithi is a tropical species; it grows well in the range of 21-29 °C combined with a fairly high humidity level. Accordingly, first instar caterpillars should be kept in closed plastic boxes. From the second larval instar onwards, they can be switched directly on a potted plant or cut branches placed in a Lepidoptera rearing cage. Unfortunately, the scores in terms of life-span, fecundity and general weight (both pupal and larval) will be generally lower compared to outdoor rearing.

Here some guidlines that you can follow to raise Antheraea polyphemus, an American relative of our Antheraea frithi: the rearing method is pretty similar.

At the end of the second and last generation of the year, cocoons oshould be stored at 15-20°C untill the following spring!

Not so much is known about this species, including it’s host plants. In literature, the mentioned host plant species are: Lithocarpus dealbata, Hook (Fagaceae), Shorea robusta, Roth (Dipterocarpaceae) and Quercus accuitissima (Fagaceae). In captivity, Liquidambar (Altingiaceae) and Quercus sp. (Fagaceae) are recorded to be good substitutes.

The temperate tasar moth: one of the biggest source of wild tasar silk

Antheraea frithi is reared in India and other regions of tropical Asia (including Thailand) to produce the tasar silk (or tussar silk). India is the second largest producer of this type of silk, and in there, many tribal comunities (like Garo, Boro and Rabha) survive thanks to the sericulture industry.

Thus, Antheraea frithi, like other Antheraea species, is well studied by entomologists to maintain and improve this peculiar tradition of silk production, the most important activity for the tribal communities.

Antheraea frithi eggs and cocoons are now available in our shop. If you have any question don’t hesitate in contacting us.